Self Financial, a fintech company that aims to help consumers build credit and savings at the same time, announced today it has raised $50 million in Series E funding.

Altos Ventures led the financing, which also included participation from Meritech Capital and Conductive Ventures and brings the Austin-based startup’s total raised to $127 million since its 2015 inception.

The company, as many fintechs these days, aims to make building credit and savings more accessible, regardless of a person’s financial history. It requires no hard credit check to get started.

Today, Self Financial has 200 employees, up from about 80 at the beginning of this year. The startup, which was initially founded in California but relocated to Austin after participating in the Techstars program in the city, plans to do more hiring with its new capital.

Garvey declined to reveal hard revenue figures, saying only that Self is going to do “nine figures” of revenue this year, about 2x compared to 2020. Self’s active customer base has more than doubled in the past 12 months to about 1 million today. Over time, it has served more than 2 million customers.

The fintech’s flagship product, he said, is basically secured installment loans, or small-dollar loans with a deposit account that has a CD (certificate of deposit) connected to it.

After using that product successfully customers can then get access to Self’s Visa credit card. 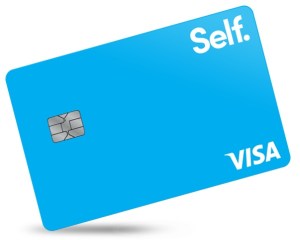 Self’s Credit Builder products are issued via its three bank partners. But the company has built its own proprietary core technology platform that Garvey says “powers everything behind the scenes.” The company’s products are available via iOS and Android, as well as through a desktop application.

Beginning this month, Self will allow people who hold an H-1B or L 1 work visa or student visa to open Credit Builder accounts, a move Garvey said “opens the door for more people to participate who are new to the U.S. credit system.”

“We believe everyone should have the opportunity to improve their financial future,” he added.

Part of Self’s longer-term goals include entering the insurance market, as well as the planned launch of another product designed to help give its customers access to credit.

“Credit score is used for a lot of things, and in many states it’s an important factor in determining the cost of auto insurance,” he said. “We’re going to be helping our customers to get access to auto insurance as one of the benefits of a higher credit score.”

The company plans to use its new capital to hire about 50 to 100 people over the next 12 months, Garvey said. Recently it named Kathleen Leonik to serve as its chief compliance officer. She has previously held leadership positions at Juniper Bank, Barclaycard and, most recently, Mercury Financial. She also worked in compliance at First USA, Bank One and Chase.

Altos Ventures Managing Director Anthony Lee described Self as a pioneer in the increasingly crowded space. This week, TomoCredit, which has the similar goal of helping underrepresented consumers build a credit history, announced it has raised $10 million. And last week, Varo Bank — the first  U.S. neobank to be granted a national bank charter — raised a massive $510 million in a Series E funding round at a $2.5 billion valuation.

“James and his team at Self have had a clear mission from day one: to build credit and savings for millions of Americans who are marginalized by the mainstream financial system,” said Lee. “It’s a mission that is going to take decades to realize and we are happy to be there for the journey.”

For Silverton Partners’ Managing Director Morgan Flager, who participated in Self’s Series A-D rounds, Garvey’s passion has been key to its repeated investments in the company.

“When you have a founder with a clear and noble vision for solving a critical problem this massive, it is hard to say no as an investor,” he told TechCrunch.

The firm was also drawn to Self’s mission to “lift up” subprime consumers.

“Many of the offers that target subprime consumers are expensive and restrictive,” he said. “Self Financial is unique in that it intends to break this cycle, rather than just profit from it in a different way.”

,Self Financial, a fintech company that aims to help consumers build credit and savings at the same time, announced today it has raised $50 million in Series E funding. Altos Ventures led the financing, which also included participation from Meritech Capital and Conductive Ventures and brings the Austin-based startup’s total raised to $127 million since