Notion said on Wednesday it has acquired Automate.io, an Indian startup that builds connectivity and integrations with over 200 services, as the workplace productivity startup looks to accelerate its product expansion to become more compelling for tens of millions of individuals and businesses that are increasingly moving to digital collaborative tools.

The San Francisco-headquartered startup, which was last valued at $2 billion in private markets, said the acquisition of the Hyderabad-headquartered Automate will help Notion understand the know-how of — and leverage — the 200 integrations the Indian startup has developed to give users and enterprises alike the ability to bring their most workflows into Notion.

The acquisition, first for Notion, is a “strategic piece to our puzzle,” said Akshay Kothari, chief operating officer of Notion, in an interview with TechCrunch. “It’s a sizable acquisition,” he said, though he did not disclose the terms of the deal.

Acquiring Automate — which had only raised capital once, and that too largely from friends and family, and which like Notion is profitable — is also enabling Notion to set up an engineering center in India, its first outside of the U.S., he said. (He expects to set up more offices in India, where the startup’s product is already popular especially among startup circles, in the future.)

Automate, which employs about 40 people, has developed a wide-range of integrations with firms operating in several industries including e-commerce, payments, marketing, social, and productivity. One of the firms it has built a number of integrations for is Notion. 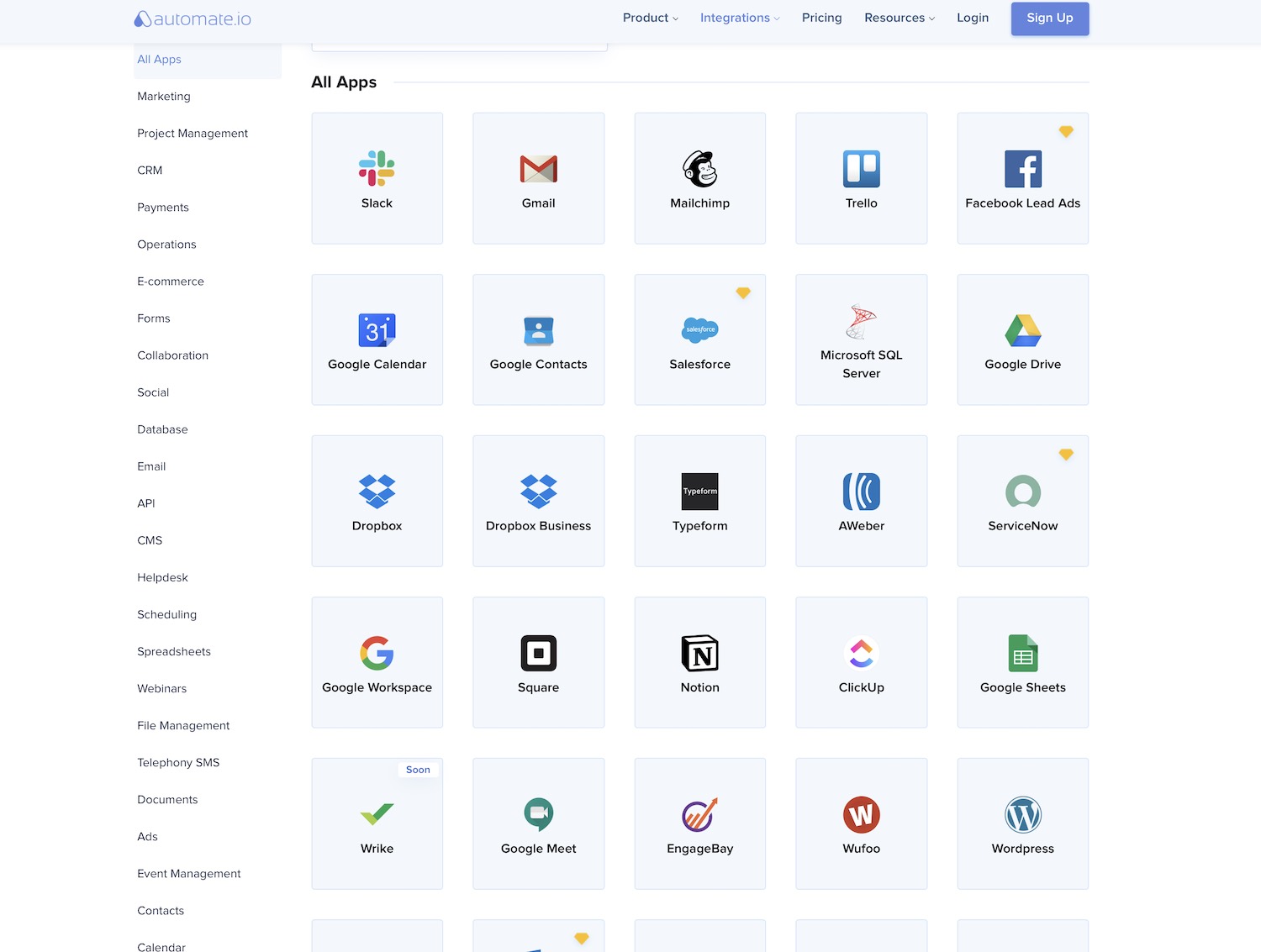 A look at some of the popular services for which Automate.io has developed integrations.

A Notion user / admin can use Automate to connect the collaborative platform to Slack, Gmail, Mailchimp, Salesforce, Google Workspace, Office 365, Dropbox, WordPress, RSS Feed, PayPal and dozens of other services, for instance. “Each product has an API. What Automate has done is work with each API to build pipes in a way that users themselves don’t have to worry to get work done,” he said.

Notion discovered Automate a few months ago when it launched its API to the public. “I hadn’t heard of them. But because they were one of our first partners, I looked into who they are,” said Kothari, who reached out to Ashok Gudibandla, chief executive of Automate.io, a few months ago.

“Our mission has always been to support businesses by automating repetitive tasks, and to be more efficient. We want users to spend less time dealing with challenging integrations, and more time building and creating the software they need,” said Gudibandla in a statement.

“Together with Notion, we’ll be able to offer the same integration and automation experience to a broader set of users across the globe. We are thrilled to be joining forces with Notion, an ideal partner who shares our values and commitment to extending the power of a collaborative, seamless software experience.”

Automate.io currently offers some paid plans and will continue to offer those to customers, said Kothari.

On a side note, as a longtime Notion customer, I asked Kothari if the company is working on adding support for Apple Pencil and Spotlight search on Mac. Both are in the firm’s to-do list. He offered me a glimpse at some of the things the startup is working on — and the list is quite big (the startup tracks every feature request, even those made on Twitter) — and Spotlight search integration on iPhone should ship soon.

With Automate.io, Kothari said he expects Notion to be able to get some of these features out sooner. “The challenge we face is that Notion is currently used by individuals, individuals working at companies, and those companies. Each person has a unique request. One of the things we are trying to do is stay horizontal,” he said.

,Notion said on Wednesday it has acquired Automate.io, an Indian startup that builds connectivity and integrations with over 200 services, as the workplace productivity startup looks to accelerate its product expansion to become more compelling for tens of millions of individuals and businesses that are increasingly moving to digital collaborative tools. The San Francisco-headquartered startup,